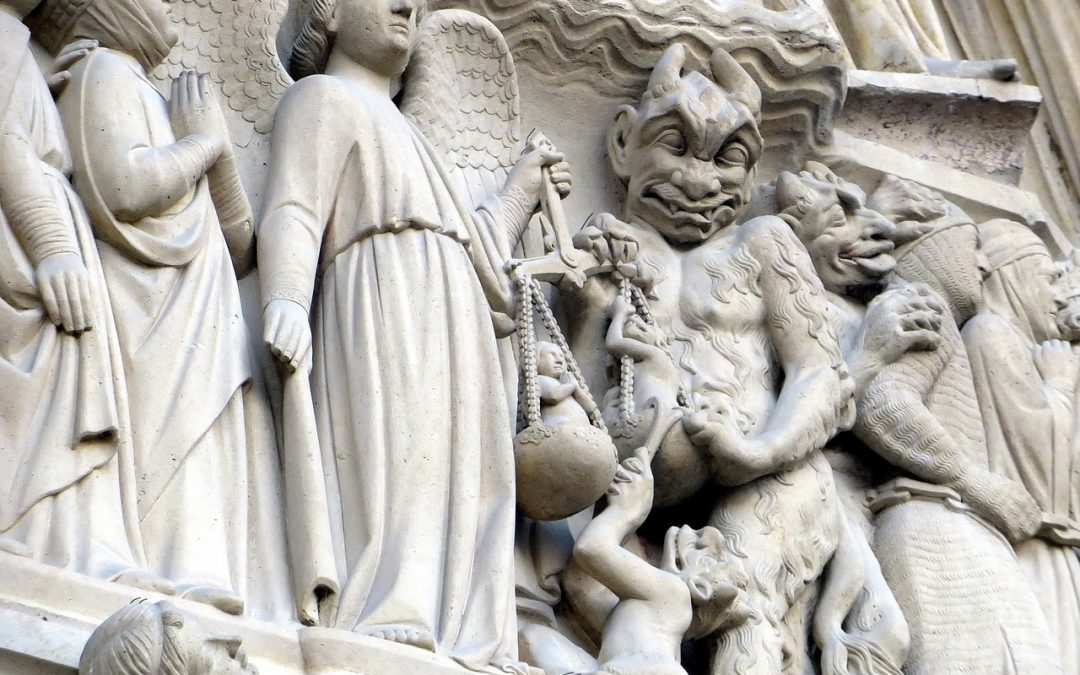 The metaphysical concern for the origin of, reasons for the persistence of, and possibilities for the eradication of evil is one of the most important discussions to have in relation to human happiness and survival.  After all, how can humans thrive and be happy if their efforts are continually sabotaged by evil?  Once these issues are addressed, deductively we might come to the essence of the Great Idea of “Good and Evil”—What is “good” and what is “evil” in the first place?

This understanding of “what is evil” and “what is good” becomes metaphysically vastly more important under monotheism.  After all, if there is one God and God created all, knows all, allows all, is all powerful and everywhere—and good—then why is there any evil in the universe at all?

For the polytheistic and pantheistic worldviews the answers are many—if there are any number of gods, it could be that the god you follow has its own enemies and this is the cause of the evil.  It could be one of the natural elements that causes “evil.”  It could be any number of supernatural entities or natural powers.  Evil might not even be anything personal, just phenomena that are oblivious to humankind.

But when there is one entirely good, perfect, eternal God and there is still sin in the world, there is only one or two possible explanations for where this “evil” originates—whether it is explained and manifest as sin, death, bad karma or anything else.  The evil, if it is not God’s doing, emanates from another source (many say this source is human nature itself, for others there is a powerful malevolent entity such as the devil).

“A thing is good so far as it is desirable.”

So now we have to ask why?  Perhaps God allows this evil as part of a divine plan?  Perhaps God is doing battle against the forces of evil and the outcome is uncertain?  This last question, however, is distasteful for monotheists as it invalidates the very underlying notions of an all-good, all-present, all-powerful God.

“The taste of good and evil depends in large part on the opinion we have of them…If evils have no entry into us but by our judgment, it seems to be in our power to distain them or turn them to good use…If what we call evil and torment is neither evil nor torment in itself, if it is merely our fancy that gives it this quality, it is in us to change it.”

For mainstream monotheism, then, the issue of “Good and Evil” comes down to humans and the evil we bring into the world with the stain of “original sin.”  We, suggest the heritages of Judaism, Christianity and Islam, are responsible for evil in the universe and God allows this as God wishes for us to freely come to loving Him.  In other words, evil exists in the universe because we want it to and God allows it in order to preserve our free will.

Beyond the question of the origin of Good (God) and evil (the human Fall), these very monotheistic traditions also suggest codes of ethics in sacred texts (The Holy Bible and the Qur’an) of how to mitigate the damage and return to God.  This are chiefly the Ten Commandments, the teachings of prophets and Jesus Christ, and also the Five Pillars of Islam, but these sacred works contain hundreds of mandates for behavior to rectify the damage we, as Fallen humans, have done to the universe.

Of course there are a myriad of other metaphysical and religious explanations that explore the nature, duration and purpose of Good and Evil in the universe—moral theory, social influence, excess.  In classical Greece, for instance, Socrates suggested that evil was simply ignorance of the Good, the True and The Beautiful.  In Eastern religious traditions, whether it be Hinduism or Buddhism or even Confucianism, suggest a “mechanics” of evil in which the evil (sin) you do is revisited on you and your task is to work off all of your evil karma and seek goodness.

The questions are important and the answers are vast, but one thing is certain—we have all experienced something we deem as “evil” and the best hope we seem to have is to learn from it to seek knowledge, virtue and, finally, wisdom.

“There is nothing either good or bad but thinking makes it so.”